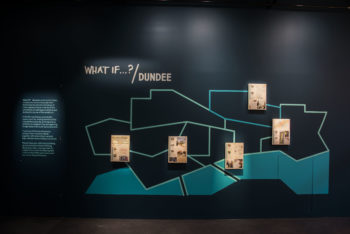 On 12th April 2021, BECK Scotland were contacted by 7N Architects to see if they could assist on a project with an immediate start and a tight schedule.  Brand new exhibition ‘What if…?/Scotland’ was due to be staged in Venice as part of the 17th International Architecture Exhibition, La Biennale di Venezia.  However, the pandemic forced the exhibition to look for a local home shortly before opening day.  As a result, V&A Dundee required works to convert its learning centre into a gallery that could house the works.

The team visited the site the following day and organised a complete supply chain within the three days that followed.  BECK Scotland worked closely with the V&A on the scope of works, including new partitions, decorating, joinery and scaffolding support for hanging the exhibits.

Design, procurement and installation were all completed as planned within the allotted three weeks, allowing the original launch date of the exhibition to take place.  In addition, creative design solutions were used to allow temporary works to be dismantled at the end of the project and return the space to its original use.

‘What if…?/Scotland’ originated from a self-initiated study by 7N Architects, on their home city of Edinburgh and explores the hopes and dreams of residents from five locations around Scotland.  Citizens were asked about their wishes for the future of the community in which they live, then paired with architects and designers to explore the possibilities which could evolve from these discussions.

The team worked collaboratively with 7N Architects and Architecture & Design Scotland to create a space for this innovative & thought-provoking exhibition.  The ‘What if…?/Scotland’ exhibition is commissioned by the Scotland + Venice partnership, which provides architects and artists based in Scotland with a valuable platform to showcase their work on the international stage at the Venice Biennale and is a partnership between Creative Scotland, British Council Scotland, National Galleries of Scotland, Architecture and Design Scotland and the Scottish Government.

Andrew Piggott at 7N Architects says: “Beck played a vital role in the realisation of What If…? / Scotland, converting a classroom within V&A Dundee into a gallery space in a very short timescale. The works – which included bespoke joinery, partitions and a ceiling system – were all delivered on programme and on budget”

Corin Dougall, Director for BECK Scotland says: “We’d like to thank 7N Architects, the V&A and Architecture and Design Scotland for the opportunity to support them on ‘What if…?/Scotland’.  The exhibition was delivered in a short space of time, through teamwork and collaboration, underpinned by our experience in museum fit-out. The end result is fantastic, and we hope the exhibition is a resounding success.”