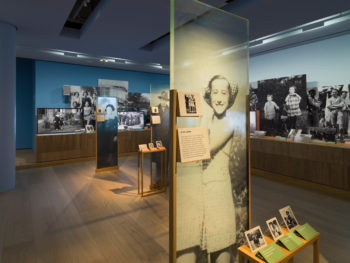 Two decades after BECK completed the first Holocaust Exhibition on Level 3 at the Imperial War Museums London, the company was privileged to return to fit-out the new Holocaust Galleries in a new space on Level 2.

A major reconstruction and refurbishment of the existing cinema and surrounding areas created a 1300 sqm space in which the BECK team would bring to life the new designs from Casson Mann.

Work on the fit-out began off site in August 2019 and concluded almost two years later, on site in July 2021.  The works included plinths constructed from Corian, timber or Jesmonite, graphic displays, exhibition lighting, electrical works, new flooring, metalwork for displays and AV housings, decorations, interactives and touch objects, showcase integration and the delicate reconstruction of a train carriage, removed from the previous Holocaust Exhibition on Level 3

The time frame saw the team cope with the many challenges surrounding Covid.  Sample approval meetings were moved online, within a specially built prototype room at BECK.  The team also had to deal with both onsite and country wide restrictions, in place to prevent the spread of Covid during the peak of the pandemic.  Despite these issues, the team continued to work.

Senior Project Manager, Paul Gilling says: “I’m incredibly proud of what the team achieved despite the challenges we faced.  The quality of work and effort put into the project is clearly shown within every detail.  From the drawings produced, to the fabrication of items and the final installation of the project, as the public will see.  I believe we have taken Casson Mann’s design and executed it to the last letter.  I know for myself and the team, this project has been a great experience and educational along the way. “

IWM’s vision for these new Galleries has been to support people to understand that the Holocaust happened to ordinary people in our world, and not in a distant, black-and-white past. As such, the Galleries are bright spaces, reflecting that six million people were not murdered in the dark.

In addition, individual stories from some of the six million Jewish people murdered in the Holocaust are told through over 2000 photos, books, artworks and letters, and personal objects ranging from jewellery and clothing to toys and keepsakes.  All aspects of these extensive Galleries’ development, from the design of the space to the design of the AV, supports the visitor to engage with the sensitive content appropriately.

Senior Graphics Manager Ollie Potter says: “The project has been a long emotional and educational journey, which I am proud to have been a part of.  There were many different applications and processes on this project, some of which hadn’t been done before.  I’m glad to have given the galleries the impact they need, to prevent this awful set of events fading from human memory.”

Very soon, the people who survived the Holocaust will pass away but the galleries continue to tell their stories for the next 15-20 years, meaning that successive generations will be able to learn about the events which took place.

Dal Chana, Board Director at BECK says: “The Imperial War Museum is one of the most iconic museums in London, if not the country.  It is a great honour for BECK to secure projects of this magnitude, on a subject of cultural sensitivity which requires great care.”